Posted on January 7, 2014 by panoramicdon

I realized at some point last year that I’d been writing predominantly about football, Man United to be specific and decided to diversify and cater for the non-football audience as well. Given how shitty United have been since then, it seems a timely decision in hindsight. But things have deteriorated so drastically that writing about United seems one of the few cathartic avenues left to relieve some of the angst.

The transition to new management has left us in an unfamiliar position of strife and a plethora of reasons have been given in an attempt to explain the sudden mediocrity. Of these reasons – poor squad made worse by lack of signings, the leeching Glazers, lack of motivation among the players et al – I believe that it’s the manager’s tactics that are largely to blame for the poor performances and results. Allow me to explain.

Whereas United has always been a team that likes to move the ball wide and whip in crosses, Fergie has always mixed it up ensuring that we also create chances through the middle. It would be a stretch to claim United have been entertaining for the last three years but the football was bearable and challenged for trophies right until the end of the season. Under David Moyes, our idea of attacking play has been to get the ball out wide to Evra and Valencia for them to cross it in. Not occasionally but almost always. We’ve largely avoided attacking through the middle as though there’s some magical crater that suddenly appears outside the opponent’s box when in possession to suck in our players and the ball. This is bad enough without factoring in Evra and Valencia’s poor crossing. The result has been limp performances from United where we create very little in games. 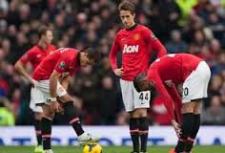 Down but not out: United can yet steady the ship (c/0 ndtv.com)

You may say that the lack of midfield options has forced this archaic style of play on Moyes but Fergie managed the same players to the league championship a few months back. And it’s not like anyone told Moyes to dither with signings in the summer anyway. But looking back, you notice a clear pattern where Moyes’ teams almost exclusively attack through the wings. It’s no surprise that Leighton Baines was one of Everton’s best players last season and explains Moyes’ desperation in trying to sign him in the summer.

The easiest solution to the dearth of options in midfield would be to sign players that would see us change our style of play but let’s face it, that’s not going to happen. Moyes was brought in primarily because he was consistently ‘successful’ without spending much at Everton. Since we probably won’t be signing anyone as Moyes himself admitted and the Glazer’s won’t sack him for the poor results, it’s time the manager stops sulking and makes the most of what he has got.

One way to steady the ship would be to ditch 4-4-2, not because it can’t work but because we don’t have the players for that system. Man City play with a 4-4-2 but they’ve got two dynamic central midfielders and effective wide players. At United, we not only lack good central midfielders but wingers as well. What we have are a number of good defenders, world class attackers and fullbacks who are arguably better at attacking than defending.

A good system that would maximize on this squad imbalance and possibly bring out the best in our players is 3-5-2. We have five central defenders and of these, Evans, Vidic and Smalling deserve to be starters at center back. Phil Jones can arguably be added to that category as well. Playing three center backs – with one playing as a Sweeper – would in one move guarantee playing time for our good young defenders and shore up the defence. Since Moyes must get his crosses, Evra and Rafael can play as wingbacks sans the priority to defend that fullbacks have. I’ve got no doubt that Rafael would absolutely kill this role. Valencia can deputize for him with Buttner as Evra’s understudy.

In midfield, the problems we’ve faced have been lack of dynamic midfielders to allow us to play two in the middle as we’d like to and finding a position for Shinji Kagawa. Playing three in the middle would allow us to have a double pivot of Fletcher and Carrick with Kagawa playmaking ahead of the duo. The extra player in the middle would see us win the midfield battle. Kagawa would also create chances from the middle and reduce our over-reliance on wing play. Adnan Januzaj has also indicated that he sees himself as a playmaker in the long run and depending on form, he’d share this position with Shinji.

Upfront, Rooney won’t have to drop deep as he’s been doing, with a playmaker tasked with creating operating behind him. Essentially, this would leave us with two world class out-and-out strikers whose sole aim is to score goals. Having Rooney and RVP stay high up the pitch will force opposing center backs and even fullbacks to drop deep and hand us territorial advantage. Kagawa would keep their defensive midfielder busy denying the latter a chance to assist his defenders. To add to the numerical advantage, Fletcher can join in attack safe in the knowledge that Carrick and three center backs are covering him. United would thus line up as shown below:

How United would line up in a 3-5-2 formation (Excuse the numbers :o)

All this seems a long shot though, but if our form is to improve, something has to give. Moyes could do worse than try out this system until the end of the season when he’ll presumably buy players and build the team to his liking. Juventus are successfully implementing the 3-5-2 in Serie A where Pirlo, Vidal and Marchisio/Pogba provide technique, industry and creativity as Lichtsteiner and Kwadwo Asamoah bomb up and down the wings. There’s no reason why the aforementioned trio of Carrick, Fletcher and Kagawa can’t replicate this for us. If anything we have better strikers and potentially better wingbacks. Add the good form shown by Moyes’ teams in the second half of the season and we might just salvage a season that is slowly turning into a tragicomedy.